Dr. Dan Shanahan prides himself on providing the highest caliber and most effective foot and ankle care to his patients in an office environment that is both comfortable and extremely efficient.

After earning his Bachelor of Science degree in biology from the University of South Florida in 1987, Dr. Shanahan attended the Barry University School of Podiatric Medicine, graduating with honors in 1991. Originally from Southfield, Michigan, he returned home to complete his 2-year surgical residency training at Kern Hospital in Warren.

Dr. Shanahan has always been committed to achieving and maintaining the highest standards of training, education, and technology in his practice. He is a fellow of the American College of Foot & Ankle Surgeons and has been board certified by the American Board of Podiatric Surgery since 1997.

He was the first podiatrist in southeast Michigan to establish an office-based surgery center accredited by the Joint Commission in 2008, and has worked as a design consultant for surgical instrumentation with the Michigan-based Stryker Corporation since 2013. He was also a clinical instructor at Kern Hospital from 1995 to 2001.

When not at work, Dr. Shanahan enjoys watching and playing sports. He is an active player in several men’s hockey leagues and coaches youth teams. He is also an avid music fan and musician, and has played guitar for more than 40 years. 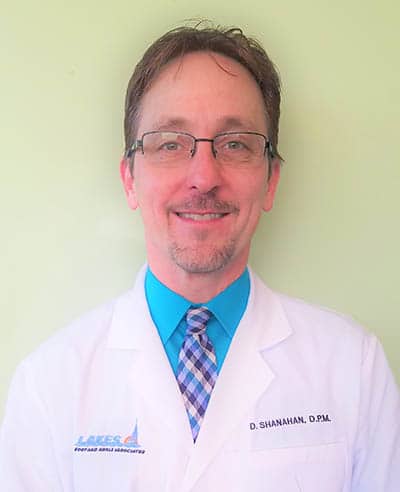