Treating Foot Warts Used to Be Miserable. Not Anymore.

It’s never very much fun to have an injury, infection, or other condition that causes you pain, embarrassment, or impairs your mobility. But treatment isn’t always fun either, and getting a particular treatment doesn’t make sense if the cure is worse than the disease.

A silly example might be if we told you the only way to guarantee that your bunion will never come back is if we cut your whole foot off. While true, there’s a reason we don’t make that recommendation!

A more serious example would be situations where a reconstructive surgery could fix a deformity, but the patient has a medical condition that puts them at elevated risk of developing serious post-surgical infections. At some point, the risk of a severe complication outweighs whatever benefit could be gained by a successful procedure. 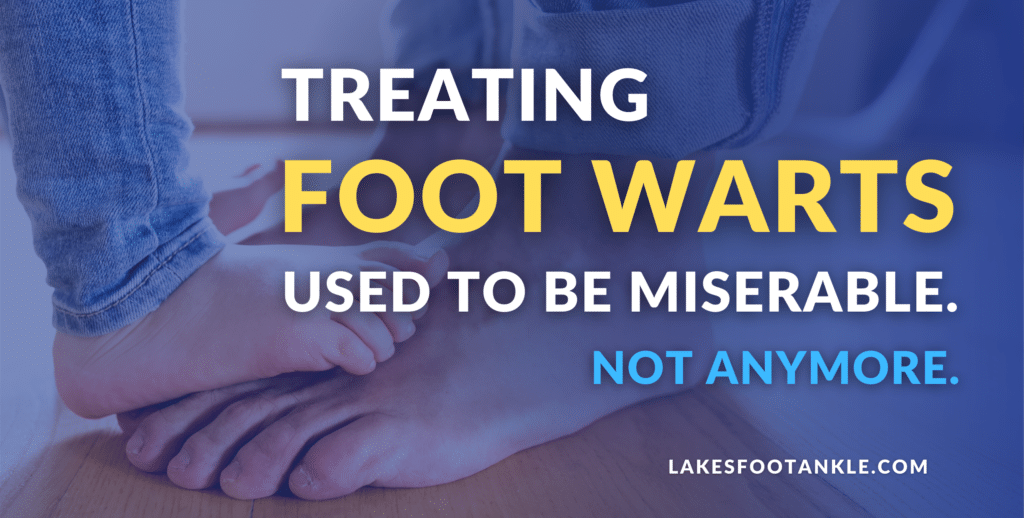 There’s no question that plantar warts are frustrating. At best, they may make you feel embarrassed every time you look at your feet. At worst, they can make wearing certain socks and shoes, or even just standing and walking, physically uncomfortable or outright painful, if they happen to be in an inconvenient spot.

Plus, they can easily multiply across different areas of your foot, or sometimes even to other areas of your body like your hands. They may even spread to other people that you live with.

And yet, lots and lots of people put up with them anyway. Sometimes, this is because the warts really aren’t bothering you that much. But more often than not, the reason for the reticence has more to do with the pain, hassle, and frustration associated with getting rid of them.

A panoply of pitiful options.

Before Swift came along—which we’ll be talking about in a few more paragraphs, don’t worry—your treatment options for warts basically fell into one of two categories:

The “don’t work” division includes just about every folk remedy you can think of, from sandpaper and duct tape to orange peels to castor oil. It also, unfortunately, includes most of the over-the-counter “wart kits” you can get at the pharmacy, which are slightly more likely to work but still have a massive failure rate—and quite often, even when they succeed, the warts just end up coming back anyway.

You were generally better off going to see a doctor and choosing something out of the “miserable” category, because at least then you could feel pretty confident that your warts would actually be gone. But these treatments (which include topical acidic medicines, cryotherapy, laser, and even surgery) are often painful, require irritating aftercare, and in severe cases could keep you off your feet or avoiding your favorite activities for a while during the healing period. They’re also inefficient, since it could take several appointments to finally get rid of the warts—and the recurrence rate was still frighteningly high.

Fortunately, you now have a MUCH better choice.

At long last, the ideal cure for warts is clearly and unambiguously better than the disease! Now that Swift microwave therapy is available, the decision to get your plantar warts treated has been officially upgraded from “tough call” to “absolute no-brainer.”

The treatment couldn’t be simpler, and it only takes a few minutes. We just lightly debride the wart (which is painless), then apply a few seconds of microwave therapy (which is painless for some, and nominally uncomfortable for others; the discomfort literally only lasts for a second and then goes away.)

With Swift, we’re treating the wart by activating the immune system from the inside out, which helps to clear out the wart and the virus that caused it. You can learn all about the procedure and how it works on our Swift service page, but the short summary of benefits is impressive stuff:

We really weren’t kidding when we said “no brainer.” Pretty much all it takes is the commute to our office and ten minutes of your time. It really is the best treatment for warts available, and we’ve got it right here at Lakes Foot and Ankle Associates.

It's Time To Leave Foot & Ankle Pain Behind!

*NOTE:  Appointment request times are not guaranteed, nor do they constitute a scheduled appointment. Once you submit your request, a member of our staff will contact you as soon as possible to confirm your appointment time. For your safety and privacy, please do not submit any Protected Health Information (PHI) through the contact form found on this page.